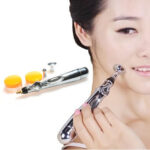 AD is currently the leading cause of dementia, accounting for 60%–80% of the total number of dementia cases (Alzheimer’s Association, 2016). AD is mainly characterized by progressive memory disorders, aphasia, agnosia, apraxia and personality degeneration. The most important risk factor for AD is aging. There are currently no drugs that can prevent or reverse the progression of AD. FDA-approved drugs for the treatment of AD can only ameliorate the symptoms of AD and have many adverse effects. As a consequence, a large number of AD patients treat memory impairment and improve their quality of life through ASM. As one of the most popular ASMs, acupuncture is widely used in AD treatment. Clinical evidences have shown that acupuncture can significantly improve the language and motor function and ameliorate the emotional and cognitive impairments of AD patients (Chen, 1992; Zhou et al., 2017; Kan et al., 2018).

In a Chinese trial, 38 AD subjects were received acupuncture at specific acupoints, and 16 subjects developed symptoms after treatment (Chen, 1992). In a meta-analysis of 10 randomized controlled trials (RCTs) of acupuncture treatment of AD involving 585 subjects, six trials showed that acupuncture has a better effect than drugs at improving Mini Mental State Examination (MMSE) scale scores of AD patients, and mean differences (MD) is 1.05 with 95% confidence intervals (CIs) 0.16–1.93; evidence from the pooled results of three trials showed that acupuncture combined with donepezil is more effective than donepezil alone in improving MMSE scale scores in AD patients (MD 2.37, 95% CI 1.53–3.21; Zhou et al., 2015). As for the safety of acupuncture in the treatment of AD, the analysis indicated that there were only two acupuncture-related adverse reactions in 141 clinical trials; only 7 of the 3,416 subjects had acupuncture-related adverse reactions, so the study concluded that these reactions are within the allowable range and are not severe (Zhou et al., 2015).

In one study, patients with ischaemic cerebrovascular disease treated with acupuncture were compared with patients treated with conventional drugs. Nerve function, as evaluated by electroencephalographic map and somatosensory evoked potential, showed a much more marked improvement in the patients treated with acupuncture (89). This has been further confirmed by experimental studies. In the laboratory, a rat model of reversible middle cerebral artery occlusion was used. The somatosensory evoked potential recorded before and after the occlusion showed that electric acupuncture markedly promoted the recovery of the amplitude of the P1-N1 wave (to 58.6% in the electric acupuncture group in contrast to 25.5% in the control group after 7 days) (93). In addition, recent clinical studies suggest that the effectiveness of acupuncture therapy can be further promoted by using temporal acupuncture (99, 100).
Comparative studies have shown acupuncture treatments to be as effective for treating paraplegia due to cerebral haemorrhage as for that due to cerebral infarction. Since early treatment with physiotherapy is unsatisfactory, it is advisable to use acupuncture as the primary treatment. Even in hemiplegia of long duration, remarkable improvements can often be achieved. Hemiplegia due to other causes, such as brain surgery, can also be improved by acupuncture (101). Aphasia caused by acute cerebrovascular disorders can also be treated with acupuncture (102).
Although acupuncture is effective for many painful conditions, there are only a few reports on post-herpetic neuralgia. Two of them were based on randomized clinical trials and provided completely opposite results (103, 104). Evaluation of acupuncture in the treatment of this painful condition therefore awaits further study.
Peripheral nervous disorders are often treated with acupuncture. For example, good effects for Bell’s palsy have been reported in randomized controlled trials (105, 106). Facial spasm is another peripheral nervous disorder for which acupuncture treatment may be indicated. For this condition it has been shown that wrist-ankle acupuncture is significantly better than traditional body acupuncture (107).
Coma is a serious condition that can hardly be cured by acupuncture alone, but in a comparative study of two groups of patients with similar levels of coma, a significantly greater number of patients in the acupuncture group had a 50% or greater neurological recovery than those in the control group. This suggests that it is reasonable to incorporate acupuncture along with other therapeutic and supportive measures in the treatment of the comatose patient (108).
Insomnia can also be treated successfully with acupuncture. In randomized control trials, both auricular acupressure and auricular acupuncture had a hypnotic effect (109, 110).